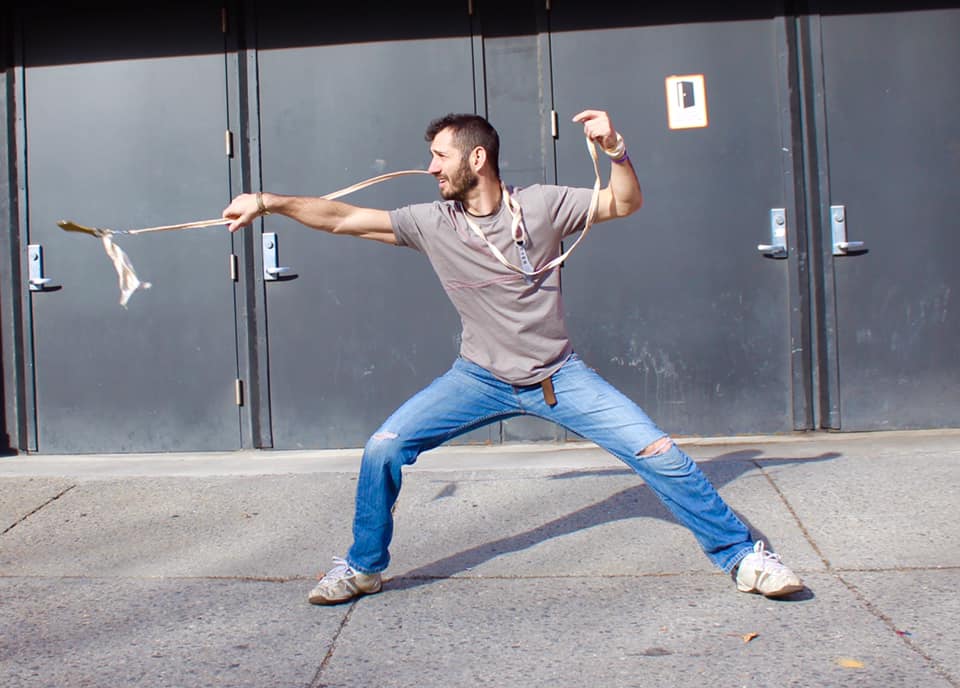 I owe every love and friendship to the rope dart. I owe my Spiritual practices to the rope dart. My harmony, perseverance, dedication and ambition in life were all lessons taught to me by a solid object attached to a humble rope. Forever grateful.

The first time I saw the rope dart used (or ever, for that matter) was by Sifu Michael Parella in his Kung Fu school, ‘Master Parrella’s Kung Fu Centers’ in Queens, N.Y. where I was an instructor. Sifu Parrella was doing basic things (I say ‘basic’ now – at the time it was incredible) and he handled the weapon well. Other than a pendulum swing, he did what we modern dartists call a ‘Collar Wrap’; I thought the rope was wrapped around him and when it came out (directly at me) I was in a state of awe.  ‘How did he do that?’- the typical question most people ask when seeing the rope dart for the first time- saturated my mind.  It was for me, in that moment, Magick.  Sifu Parrella then asked me to point to a focus mitt out of the many that were hanging on the wall. I pointed at a random mitt and stepped back.  From approximately 10 feet away Sifu Parella gave the dart a quick and small spin and he pendulum shot the dart out and hit the mitt, first attempt!  Was it just luck?  Not sure. Was it super cool? You bet! I was in love with the rope dart instantaneously. This was a cold night, January 28, 2005 – the moment my life changed forever.

When I picked up the rope dart the next day there was nothing about it on the internet.  Stop and think about that for a moment.  Nowadays, the most obscure interests have millions of hits.  Ask yourself how far you would have gone with learning the rope dart with literally no information on it. And don’t say, ‘your Sifu taught you’, because unfortunately for me he didn’t. It’s not a pat on my back, it’s inspiration for you. You have no reason to quit.

I desperately tried to recreate the simple pendulum swing I saw the previous night and had little success. I saw Sifu Parella do a Collar Wrap but no way was I going to figure that out yet – what was even a wrap?   I practiced that morning for hours on the simple swing, trying to hit things. And hit things, and hit things. Of course, I knew nothing else.

The rope that was on the dart wasn’t really rope at all- it was braided string. It was the original string that came with the dart. It was the exact string a person should not use.  I used that braided string for more than half a year, because I didn’t know otherwise. It was what was on my Sifu’s dart and I took it as gold. Today, the string on that dart is red from the blood that spilled from my rope burn – the burns were so bad at times that the skin broke and I bled onto the string. It felt like a razor going across my fingers.  I am glad I didn’t use a thick rope originally; I feel that the thinner the rope the more challenging to wield. Of course I didn’t know this at the time. A new world of comfort, control and technique  opened up when I was introduced to thicker rope.

A month before being introduced to the rope dart I learned some basic whip chain so my first few weeks of rope dart practice sessions consisted of neck spins, thigh spins, elbow spins and pendulum swing shots. Mind you that with the spin-shot combination I always tried to hit a target: something big and somewhat easy to hit. Not because anybody told me to do that but because it made sense to me. Another instructor at the school, Si-Hing Steven Guevarra, had been familiar with the rope dart but didn’t know too much about it.  He did, however, know the elbow shot and the foot shot, which he graciously taught to me.  At that moment, another new world opened up to me, the world of twining shots.

I would go to the Kung Fu school early and practice all morning, teach classes and then practice again at night. I would go out back into the parking lot in the evening during the cardio kickboxing classes and practice. Sometimes I would even take my Sifu’s dart home (rarely) and practice after a shower and after getting in bed. I would be laying there, get an inspirational idea, get out of bed and on the street. My Sifu had no idea how much I was practicing with his rope dart.  I wouldn’t get a rope dart of my own until May of that year, after some dim sum in ChinaTown with my Sifu.

Four months had gone by and all I practiced were 6 basic spins and 2 shots.  In April of that same year I was shown a VHS video called, ‘Precious Treasures’.  Precious Treasures was a documentary video that showcased 30 second to one minute clips of eclectic and rarely seen traditional Chinese martial arts.  Much to my amazement and surprise, one of the clips was a rope dartist doing the compulsory wushu rope dart form (although I didn’t know it was the compulsory form at the time).  I had been practicing diligently everyday with the rope dart for 4 months before I ever saw what it could really do!  From then on I studied and practiced the movements of this form on the video.  Because my VCR did not have a slow motion option I would watch and rewind, watch and rewind – wash, rinse, repeat.

As of this day, I have competed over 60 times with a rope dart in wushu taolu and have only stepped on an official wushu carpet twice.  Each of those two times were at the World Championships in China, once in 2012 and once in 2014.

So, before anyone ever gives up on themselves, remember this:  I was self taught, alone on a street, with no guidance and information, no teacher, no community, no friends.

For the first 5 years…

« The Origin and History of the Rope Dart and Meteor Hammer: Part 3, Certain Origins