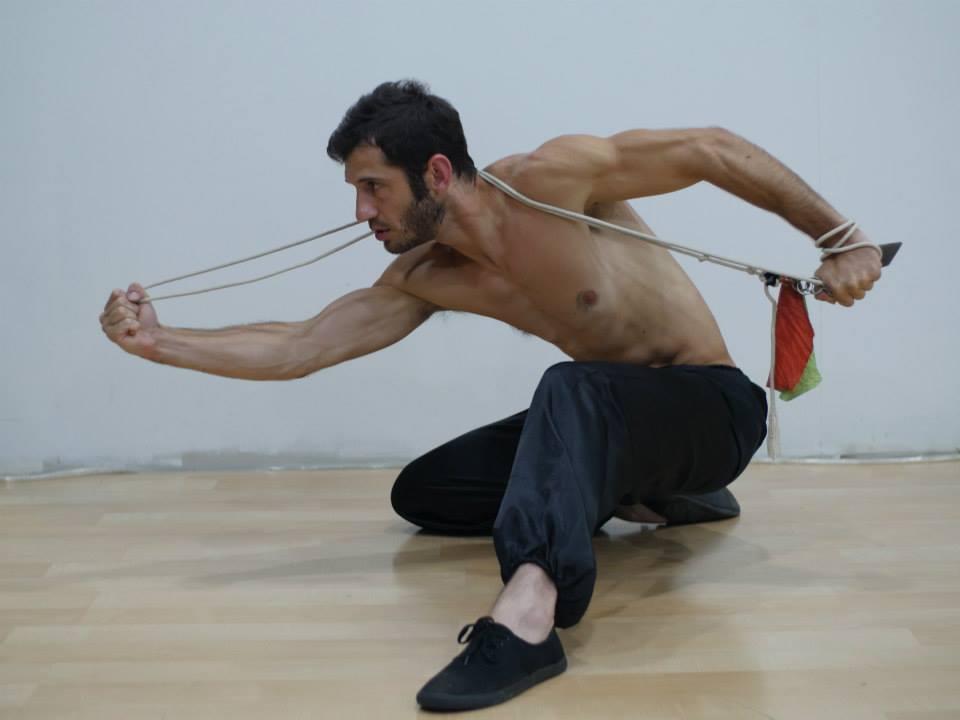 In today’s Traditional Chinese Martial Arts (TCMA) and modern wushu, the rope dart is considered to be in the ‘flexible’ or ‘soft’ weapons category due to the flexibility or, ‘softness’ the rope provides.  Other weapons in the flexible/soft weapons category are the  Double Ended Meteor (Shuang Liuxing 流星), Meteor Hammer (Liuxing Chiu 流星錘), Three Sectional Staff (Sanjie Gwun 三節棍), 9 Section Chain Whip (JiuJie Bian 九節鞭), and the Two Section Staff (Chang Xiao Bang 長小棒), which is also referred to as a ‘Lashing Staff.’

As an example of the contribution of modern dartists, imagine you were to attend a Kung Fu/Wushu tournament in the Western Hemisphere at the time of this writing.  How many rope dartists would you see?  One or two?  Possibly zero.

If you were to attend a fire and flow spinning arts festival, how many rope dartists would you see?  Anywhere from 50 to 100, conservatively.   All sharing ideas.  All figuring out concepts.  All expanding the art and information freely.

I would love to see more rope dart in wushu taolu in the Western Hemisphere, however certain barriers exist:

The most obvious barrier for entry for rope dart in today’s wushu events is by and large due to the fact that rope dart is not taught in martial arts schools, an unfortunate truth to its almost demise.  This lack of rope dart instruction and exposure to martial arts students is due to a big elephant in the room:  the majority of martial arts instructors of any style/discipline simply do not know anything about the rope dart. How could a teacher pass knowledge and information on to a student that the teachers themselves do not possess?  Sure, a sword, staff, empty hand or spear technique can be faked and fraudulent (which we see), but rope dart?  No real way to fake rope dart skills and techniques.  Either you have it or you don’t.  Where I’m from we say, ‘You can’t fake the funk.’

Another area where we see little innovation is in the compulsory wushu forms themselves:

At best, the rope dart in wushu has not changed much since it’s resurgence following the cultural revolution.  At worst, I feel the compulsory forms today digressed where rope dart is concerned, giving favor to gymnastics.  Compulsory routines, which are pre-choreographed movements commonly referred to as ‘forms’ in the West, ‘taolu’ in the East, did not leave much room to grow.  While the forms are dynamic and impressive from an acrobatic perspective, athletes only learning one form, which quite frankly, deemphasizes the rope dart while emphasizing aerial tumbling results in an extremely limited toolbox of rope dart techniques and skills.

Perhaps most hurtful to the traditional art is modern wushu athletes shortening their rope to less than standard measurement in order to compensate for the acrobatics.

The purpose behind tournament standardization in wushu is to make scoring athletes easier for judging, which is an understandable purpose.  Performance art of any kind is less biased if every participant has to do the same, or similar routine – it’s much easier to judge a backflip than a flexible weapon due to the objectivity of the former and the subjectivity of the latter.  While standardization made judging easier to ‘score’ athletes it left a gaping hole in any sense of innovation.  Techniques and concepts were not expanded upon.  Wushu athletes were put in the proverbial “box.”

As predecessors of the modern rope dart resurgence, there were 8 Western Kung Fu Sifu’s who possessed rope dart skill:

Kenny Perez (Student of Li Jin Heng, but did not learn the rope dart from him)

8 Sifu’s.  Scattered all throughout America.  No internet.

I refer to these Sifu’s as the ‘8 Tigers of Rope Dart’- a play on the ‘10 Tigers of Canton’.  Could there have been more dartists in America at this time during the late 70’s to early 80’s?  It’s most definitely a certainty, however, they did not contribute to rope darting or leave an impression the way the aforementioned Sifu’s did.  Further, these 8 Sifu’s precede all other dartists in America.  The line was traced back and stopped at these men.  According to the level of study I did (and it’s a lot!) no other Sifu’s came before them in America.

Without these men, the rope dart probably would have not survived the gap between the traditional and modern – a gap that lasted for almost half a century.  This ‘gap’ is the time in America after the rope dart made its way West from China (late 70’s, early 80’s) but before the modern resurgence of the mid to late 2000’s.  Other notable Sifu’s such as Eric Shou-Li Yao and Donald Huyn Kiolbassa (student of Daniel Pesina) entered the scene at the same time that I did – the early to mid 2000’s.

Certainly, the rope dart wouldn’t have even made a splash in America without these men.  These original ‘8 Tigers of Rope Dart’ carried a torch, perhaps one they were unaware they were carrying.  Tracing back rope dart lineage in America, it stops at these men.  Simply put, the rope dart did not exist in America before these Sifu’s.  Many of them learned the art while in China in the early 1980’s.  Some of these 8 Sifu’s literally brought the rope dart back to America from the far East – they brought  it from Chinese obscurity to a peep hole of Western popularity. Whether the listener realizes this or not, your own rope dart obsession can be traced back to one of these 8 Tigers, the 6 degrees of Kevin Bacon rope dart, if you will.  I’m not implying that you were introduced to the rope dart by one of these men.  I am implying that whoever introduced you to the rope dart got it from one of them, somewhere down the line.

The earliest evidence we have of the modern rope dart on the internet came from tribe.net, a website that matched people with special interests.  To my best recollection, the earliest conversation thread about rope dart on tribe.net was somewhere between 2006 – 2007.  The website, tribe.net, no longer exists so checking this date is not possible.

Another website, wushucentral.com, featured a rope dart as well as a meteor hammer video clip around the same time that tribe.net existed.  Sadly, wushucentral.com no longer exists as it did in the time of these videos.  It may seem more dramatic than it should, but these first 2 references to rope dart/meteor hammer on the internet are seemingly gone forever.  I’m glad I saw them when I did.

The dartist today, while equipped with hundreds of videos on rope dart to choose from, should be made aware that there was a time when only these 2 videos existed on the internet.  Count, 2.  And I can’t complain, before those two videos there were none!  I was grateful for them both, I still am.  Mind you, these two videos were not tutorials.  One video was a rope dart form at a wushu tournament in China that appeared to take place in the 80’s.  The age of the recording made the video blurry.  The other video was a meteor hammer form (and equally as blurry), which looked to be filmed on the same day and at the same location (but I cannot confirm this).  These two videos emerged on the internet approximately 1 year after I started rope darting.

The author was introduced to the rope dart in January of 2005.  This was one month before YouTube debuted, and facebook (opened only to college students at the time) did not show up publicly for another year.  Social media as a whole was still in its infant stage.  Nowadays, I chuckle when I hear young dartists say that they are ‘self taught.’  They do not know what ‘self taught’ is because the day they picked up a rope dart there was a wealth of free information out there and available to them.  I’m sure the ‘8 Tigers’ would roll their eyes at me, ‘you had 2 videos to watch?’  Sifu Kenny Perez might remind me that he used to bribe a member of the Shanghai wushu team with cartons of cigarettes for rope dart lessons.

Perhaps, I got off easy.

So, if the rope dart didn’t have any internet content and was virtually unheard of in America when I started, where did I first see it?  Further, how did I learn?

Please join me in our final Chapter of the Origin and History of the Rope Dart and Meteor Hammer in Part 4, My Story