Known as a Chinese weapon, sheng biao, the rope dart consists of a heavy object, in this case a metal dart, attached to a long rope.  The exact inventor, day and place the rope dart was first created and used seems to be lost to time forever and perhaps was never known.  While many facets of the rope dart origin mystery will likely remain, others may well be uncovered.

Before we begin to uncover the mystery, let’s clearly define what we’re initially looking for: the beginning and subsequent evolution of a weapon or tool that features weight(s) of some kind that are attached to cord(s) or chain.  These weapons/tools may be archaic by today’s standards – much like a horse and buggy would be considered archaic against a Maserati, however, they got the j.o.b done.

The seemingly oldest known example of a weapon/tool in Chinese history  that features weight of some kind attached to a cord of some kind is the double ended meteor (shuang liuxing 流星), also known as a fei chui (flying hammer飞锤) in the later Chinese armory.    Similar to the South American bolas (1),  a double ended meteor is a hunting tool as well as throwing weapon that features a rope or cord with weighted ends.  This weapon and hunting tool was used to entangle a person or animal.  Throwing techniques included aiming at a target’s legs to entangle and trip them.  Another application of the double ended meteor is aiming to make contact around the target’s neck – as the cord wraps the neck the two weights would increase in speed ending up traveling at well over 100 mph, with its final destination being the skull of the victim.

I hypothesize that this twin ended weapon – the double ended meteor – would transition to a single headed weapon at a time and place that remains unknown at present.  Today we call this weapon a meteor hammer (liuxing chui 流星錘), which was used exclusively for assault and whose head style, size and weight went through their own variations.

The meteor hammer – the rope dart’s closest sibling, perhaps fraternal twins – is a cord with a weighted metal ‘ball’ or ‘egg’ shaped head.  There are also records of ‘melon’, ‘plum’, or ‘garlic’ shaped heads, spiked heads, as well as multifaceted geometric shapes – some with as many as 14 sides (Neil Anderson), all of various sizes/weights.

Another example of a single headed weapon on a cord that somewhat resembles the rope dart is the Fei Gou (flying claw 飛鈎).  According to the Wubei Zhi, the Chinese military manual compiled by Mao Yuanyi circa 1621-1627 CE, the fei gou was used in times of war to snag the legs and feet of besieging soldiers.  The idea was to throw this ‘grappling hook’ style weapon from an elevated position, hook an enemy’s leg, lift them up and drop them. 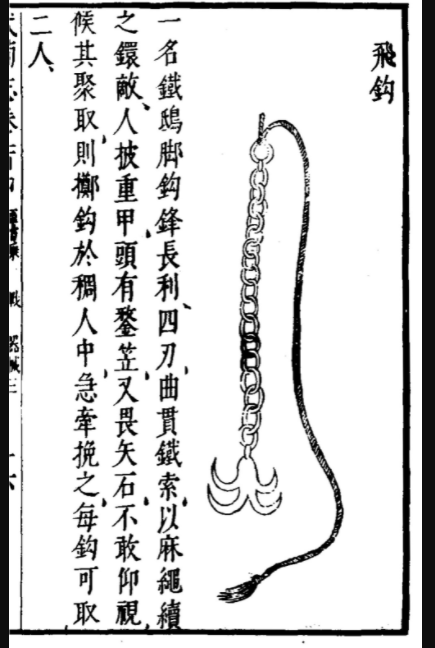 Considering the meteor hammer’s various ball shapes and the fei gou’s ‘grappling hook’ look along with their differing applications it is challenging to say what the first shape and style of a ‘rope dart-like’ head was and what it was specifically used for.

According to ‘Soft Weapons’, other potential origins of the rope dart include the ‘bone fish fork’ (2), which as the name suggests was a dart attached to a long rope used to spear fish and pull them in (3).

There are also accounts of rope dart-like weapons (resembling the fei gou) being used in naval warfare (Keqin, Xingdong).  Waring navy’s would cast these grappling hooks onto the decks of opposing ships to pull them in, similar to the Roman Harpax. 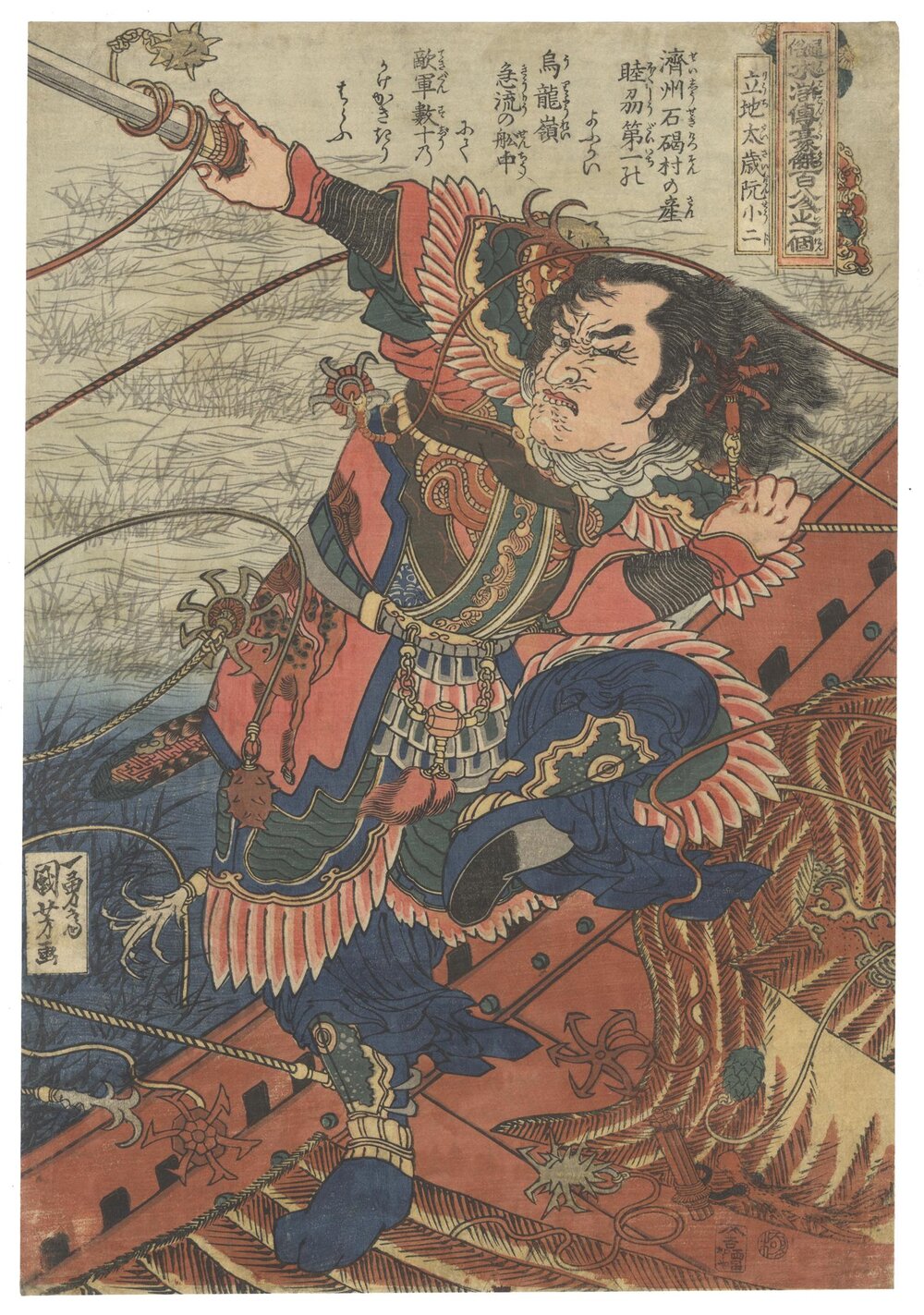 While the painting is based on a fictional tale, an aspect of the story being told is that naval soldiers were equipped with weapons that featured a weight of some kind on a cord.  Notice the different styles of heads, some even resembling a fei gou.

This all doesn’t consider that the real “first” head was just a humble rock tied to a cord.

The unceremonious way the rope dart came to be is understandable when one thinks when and why the rope dart came about: the ancients probably did not care too much about what was on the end of a cord, just that something was on the end of a cord and that it worked.  Is it possible that a person, fascinated by the meteor hammer but without one, simply tied a cord to their personal dagger, throwing dart or knife?  Certainly, they couldn’t foresee what it would become, or that anyone would care about it at all.

Like today as it was then, the rope dart is considered a ‘hidden weapon’ due to its small size and portability; it can be easily folded and hidden in a pocket, under a jacket, or harnessed on the body.

Other attributes of the traditional rope dart include metal rings, which attach the dart head to the rope as well as a flag, which attaches to the rings.

Accounts have the ancient rope dart weighing one ‘catty’ (traditional unit of measurement used in China), which is approximately 1.3 lbs.  Rope Darts used in modern wushu today range from 5.5 ounces and up to one pound.

Join me in Part 2: Uncertain Origins